During treatment, low doses of the FDA-approved serum are administered via a few injections, using the smallest micro-needle available, directly into the specific muscles of the body, neck, or face that are responsible for creating frown lines between the brows, by making facial expressions. By blocking the release of a chemical that causes these muscles to contract your choice of Botox, Dysport or Xeomin enables them to relax. The injectable simply relaxes voluntary muscle movement in certain areas of the face thereby preventing the appearance of “dynamic” wrinkles that are caused by repeated facial expressions. 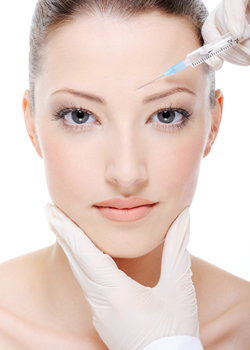 Botox, Dysport, and Xeomin act on the junctions between nerves and muscles by preventing the release of chemical messengers from nerve endings, thereby cutting off the communication between the nerve and the target muscle. The results are localized and do not change your capacity to smile, chuckle, or otherwise give expressions. Botox Cosmetic was the first product of its kind approved for use in this area that’s why we’ve built this page to help our patients understand how Botox treatments work.

What are the limitations of injectables?

The wrinkles that are already present at rest known as “static wrinkles” will not just go away. Other additional procedures may be needed to improve those types of wrinkles such as fillers or CO2 laser. Injectibles normally are the best for prevention. Botox, Dysport, and Xeomin still will work for older patients once the “static” wrinkles have formed in order to prevent them from looking deeper or getting deeper.

Years of squinting, concentrating, or frowning can cause your skin to furrow and crease. While time progresses, the skin matures and becomes less elastic and the moderate to severe frown lines connecting the eyebrows remains even when your muscles aren’t moving. With BOTOX® Cosmetic, you can get real, noticeable results and still look like yourself. Thus, you’ll still be able to frown or look surprised, except without the wrinkles lines, and creases separating the brows.

An ideal injectable candidate is a man or woman that is displeased with wrinkles and lines around the eyes and/or on the forehead due to aging. Patients should be in overall good health and have realistic goals. Patients should understand the limitations and benefits of Dysport, Botox or Xeomin. We can help you choose the best product for your condition and goals, and we will smooth away trouble areas as we age and restore confidence in patients.

How Botox Treatments Work | The Procedure

If requested, the physician may apply a cold compress or numbing topicals.

After results begin to fade, repeat treatment is necessary to ensure a youthful appearance.

the physiological Neuromodulation process of neurons is diffused in specific areas of the nervous system. 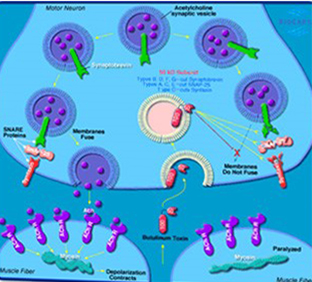 Botox molecules are shown above binding to the nerve ending, preventing the release of neurotransmitters into this space, thereby not allowing the nerve to muscle communication. Thus resulting in relaxation of the muscle.

Tiny amounts of the fluid are injected into a specific facial muscle so only the targeted impulse of that muscle will be blocked, causing a local relaxation. Only muscles that are treated are affected. Muscles needed for important functions like eating, smiling, kissing and eye-opening are not treated. These muscles and their continued function helps to maintain a natural look, there should be no impact on skin sensation in the treated areas.

This process will start taking place in 24 hours to 4 days, reaching results after injection in 2 weeks to fully complete. The nerve regenerates new endings in about 4 months and the entire cycle starts again. This is why Botox injections need to be repeated on average every 3 to 4 months for optimal results. Botox leaves no significant residual effects beyond 4 months for most people.

Type A – Botox® Cosmetic, is a naturally occurring protein that is purified in the laboratory, produced and distributed by Allergan, made from Clostridium botulinum bacteria. It “sticks on” nerve endings and prevents the release of chemical transmitters that activate muscles, preventing stimulating muscle contractions.

Since the late 1980s, it has been used for additional cosmetic purposes. In 2002 Botox gained its official FDA approval for treatment of Glabellar wrinkles, “frown lines” or the now infamous “11 lines” in people ages 18 to 65. Treating other areas of the face and neck with Botox is considered off-label usage of the product. Botox has also been FDA approved for injection into the axilla for treatment of excessive sweating and is undergoing clinical trials in the US for FDA approval. Although Botulinum Toxin therapy can have a dramatic effect on dynamic wrinkles, it is also used to reduce pore size on the skin.

Type B – (MYOBLOC) is not intended for cosmetic purposes. It was originally used and FDA approved in 1980 to treat ophthalmologic muscle disorders, such as eye spasms, lazy eye, eye ticks, uncontrolled blinking, neurological disorders causing cervical dystonias, as a remedy for the neck, facial spasms, and other central nervous system disorders.

Xeomin is the natural alternative to Botox and Dysport as it does not contain any additional additives other than botulinum toxin A. This is important because our bodies create antibodies when they sense a foreign substance entering the system. Botox can sometimes be seen as a foreign substance and our bodies can try to fight the “foreign invader.” For those looking to go the all-natural route, Xeomin may be the best choice for you.

Take the next step: request your Free Botox, Dysport, Jeuveau or Xeomin Cosmetic – Consultation now at one of our top medical spas in the country and call us at 724 987 3221